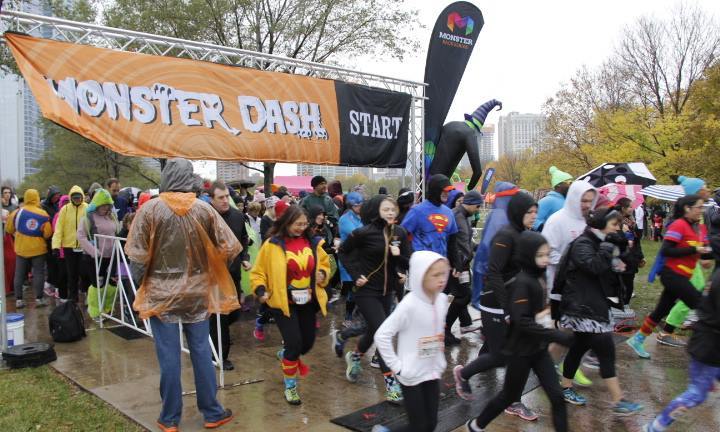 Ran my first 10k race at the Team Ortho Monster Dash on Halloween. It was a costume race and more of a fun race than a serious runner’s race.

A few notes about this year’s Monster Dash:

I registered for this race at the Chicago Marathon expo for $50 with a discount expo code. I didn’t run the Chicago Marathon, but I did a long run that Saturday ending at the expo to check it out. I got free bonus Monster Dash socks and picked up an x-small zip-up on site (since they had run out of smalls).

For the 10k, there were 908 runners, 634 of whom were women. It was neat to see a lot of people running in costume, and some of them were pretty ridiculous. The least runnable costume I saw was some sort of caterpillar thing made up of six or so connected runners. Since it rained pretty heavily, I’m glad I only ran the 10k and not the half marathon. My last minute not-so-well-thought-out pretend costume was Marty McFly with the wrong sports almanac - with a Cavs jersey, a cubs hat, a UChicago gaiter, and an orange vest. (Bunch of losing teams, get it?!?) Well, that’s what I had in my closet.

The end of the race was also pretty confusing because the medals were far from the finish line, so it was unclear where to go after you crossed the finish. Afterwards, got a banana and a free pair of ear warmers from a sponsor at the post-race tents and then booked it out of the rain for brunch at Dusek’s.

Rainy day spoiled it a little for me, and the race was a bit disorganized. I’ll sit this one out next year.