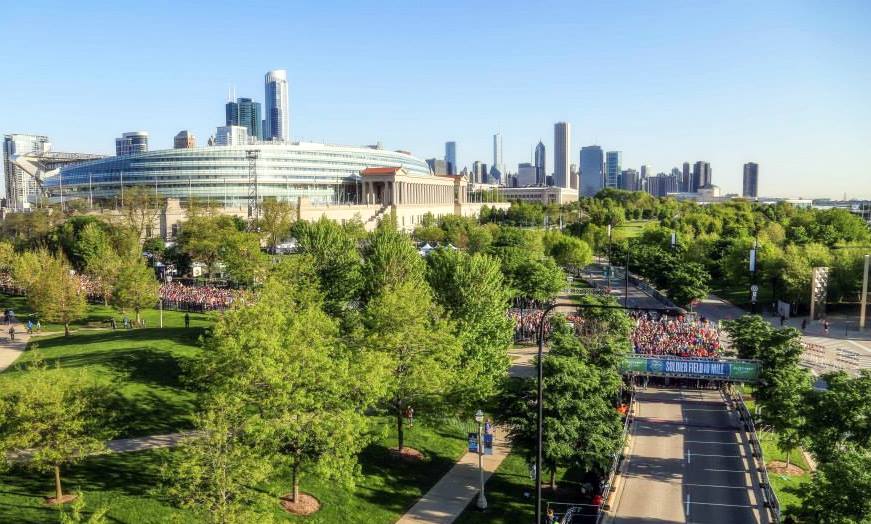 Ran the Fleet Feet Soldier Field 10 Mile race this past Saturday, my fifth race overall and my favorite so far, hands down.

For my current run schedule, I’m following the Nike+ Coach beginner half marathon training program but adding two miles onto the long runs since this is my second time around. This 10 mile race fit well with that schedule, so I again just approached this race like a normal but speedy Saturday run with a lot more people around.

Think this was the earliest I’d ever gotten up for a race (4:00-ish). The race start was 7 am, sooooo early. Turned out to be a good thing though since the end of the race started to get pretty warm.

Great things about this race-

We picked up race packets at the Fleet Feet store in Old Town the Thursday before the race. I ended up paying $86 when I registered at the Shamrock Shuffle expo, but got a $20 voucher for Fleet Feet that I used for a new pair of running shorts. The packet was the dri-fit shirt shown in the pic above and a clear bag for gear check.

The emcee had been quoting ~13,000 runners, but the results look more like there were 10,392 participants, 6,103 of whom were women (59%). Was a pretty big race for running half on the lakefront trail, and it did get a bit crowded for me on the other side of the turnaround point.

The start was done in waves by (I think) 15 corrals, so I didn’t start until about 7:35 am. If it was a bit bunched up for me at the turnaround, really glad they spaced things out a bit at the beginning. I imagine it could have been really bad if not, going from the super wide LSD to the narrow lakefront trail. I was also nervous that the very beginning of the race went through the McCormick tunnel, but the lights were on in there this time, so no issues.

Compared to the other runners, this put me at

So I was pretty solidly in the middle for this one. Fine for me!

After the race, met up in the stadium seats, then headed out of the building to the post-race party on the grass. Got a refresher bag of snacks, tried ‘Muscle Milk’ for the first time, which was pretty good, and cashed in my beer ticket for a Goose Island. No free hot food, which was a little bummer, but I guess it was still super early to eat. But not too early to drink! I would have paid for a second beer, but the $6 price tag was a buck too steep for me. After relaxing in the grass a bit to the music of the cover band (great job!), took a walk into Grant Park and then headed home.

Great race for me! Super super happy with my consistency and negative splits getting gently faster. The weather was pretty perfect, just a bit warm at the end. I really like the 10 mile distance since it’s just far enough (for me) that I feel like I have to train but not as intimidating as the half marathon. Was really happy to not have another 3.1 miles at the end.

This race felt super well-organized and had such a great energy and tone- I will gladly run this race every year.